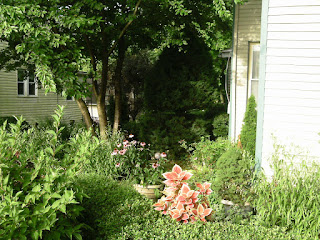 My garden was doing well, but it lacked points of interest. Looking online I found many things that I would like, but they all had one thing in common... They all cost more money than I was willing to spent. I started thinking that I could, with a little effort, create some of those things on my own with things I had around the house. 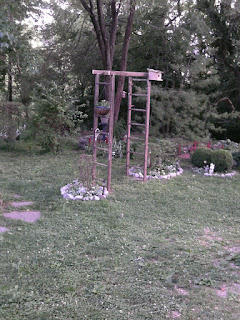 The Old Ladder Trellis
I had been wondering for awhile what I was going to do with this 40 foot wooden ladder that was no longer safe to use. Someone I knew showed me how they had made one into a little garden fence. That got me thinking about my garden, and what it needed. It only took a few minutes to see that yes, you could make a trellis out of an old wooden ladder, and the next day I did just that. 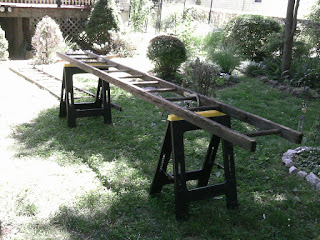 It wasn't complicated in the least. Just measure the 2 side pieces equally. and another for the top. Attach with screws, and brackets, and bury each "leg" about 1 food below the ground, and it was done. After that I hung some plants from it, and attached an old looking bird house (that I also made), and it looks great. It also adds interest to that part of the garden which I thought was lacking. I used left over ladder pieces for porch decoration, and tomato plant holders. 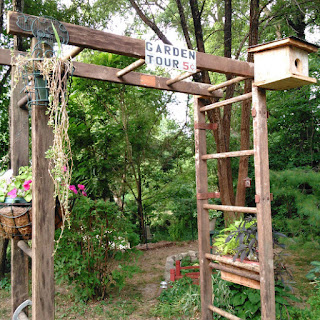 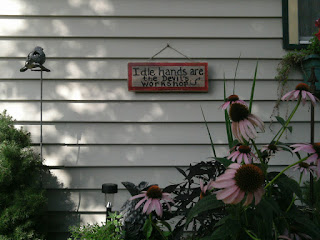 I had been wanting old signs for awhile to put around the outside of the house, but if you look at the prices, they can be a little costly. Again I used what I had at home already, which is wood, and paint. You need only to choose what you want your signs to say, and paint it on them. I then sanded mine a little to give it an aged look, and finished by staining it to seal it, and I was finished. You also have to paint in what you would like it to say, but don't worry too much about that, it doesn't need to be perfect. The sanding, and staining will hide any mistakes you might make. 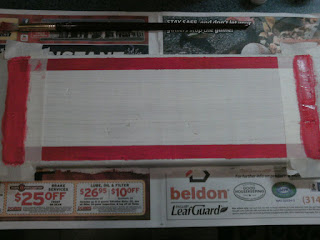 I don't know what I will be doing next, but I an sure that it will be as fun as these two projects have been. Will you now be trying out something for your own home??? 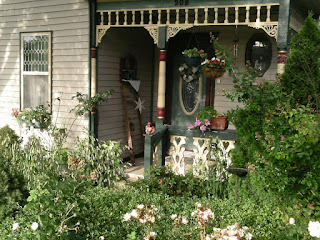 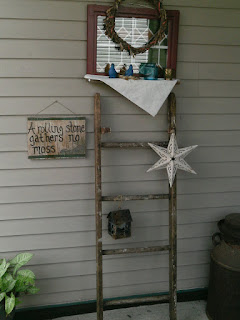 Posted by davids ghost at 10:28 AM No comments: